Your browser does not support iFrames. 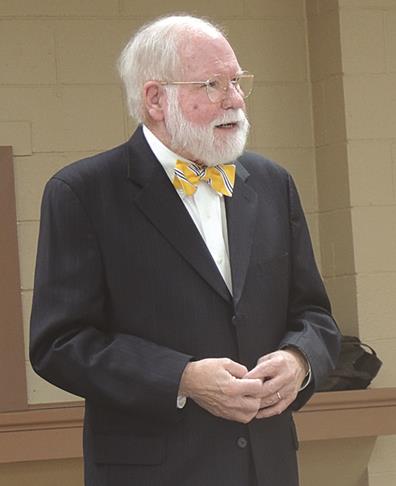 RAY LIGHTNER/DAILY NEWS Senior Judge Sid Esary spoke with the Educational Prosperity Initiative to get the word out about the Accountability Court.

Spalding County has an accountability court to help veterans and those with drug, alcohol and mental illness issues get treatment and stay out of jail.

“We take individuals charged with a crime, and pull them out of judicial system and put them under our umbrella,” Judge Sid Esary said.

It is a voluntary 16-month program, he said, where participants have to agree to treatment, counseling, drug testing and if they complete the program the charges are dropped.

Esary, a former State Court judge, said, “for 10 years, my job was to determine if someone did or did not do it, assess a fine or punishment. What was being accomplished? Not a dag-gum thing. We’ve taken away their money and ability to get a job.”

When they serve the sentence, he said, “they were no better off.” The purpose of the accountability court, Esary said, “is to try to help them instead of punish them. Punishment only goes so far.”

He explained the accountability court is a new movement in the justice system, where they are pulled out of the system and suspend the sentence, while treating the underlying problems of drug and alcohol abuse/addiction and mental health problems.

“We bring them out of the system and put them through a rigorous treatment program, with twice weekly drug tests, counseling sessions, over 16 months,” Esary said.

In that process, Esary said, “we hope they learned to deal with problems and they are given tools to deal with them.”

“I was appointed by Judge Josh Thacker, who succeeded me, as a judge pro tem (temporary), and was appointed a senior judge by the governor,” Esary said.

In that time, there have been nine graduates, he said, with15 currently in the program and another five or six coming in.

“The whole idea of the accountability court is just that, to hold them accountable. It is an alternative to punishment,” Esary said.

“We try to catch them before they are convicted, so they don’t have a conviction on their record when they get out,” he said. “If they complete the program, we dismiss the case against them.”

Esary said the program “ain’t a walk in the park. It ain’t easy.”

He said it is voluntary, and some do not want to do it because they have to give up drugs and alcohol.

“They’d rather pay the fine or go to jail,” Esary said.

“We have folks with severe problems, and the problem is not just because they are weak,” Esary said. “There was poor upbringing, self-medicating with drugs and alcohol. Once that monkey is on your back, it is hard to get rid of.”

The objective, he said, “is to treat the underlying problems, so they don’t get in trouble again. It is funded by a grant from the state and some local funds for office space, but because of the funding, it is limited to those charged with a crime.”

“We do a background check, and ask the prosecutor to them under our program,” he said. “They will dead docket the case, not prosecute, as long as they complete the program.”

He said, “we have had to remove four or five, out of some 30 we’ve dealt with. Eighty percent actually succeed, graduate from the program (and it) is actually outstanding.”

Esary spoke to the Educational Prosperity Initiative, to help get the word out.

“We’ve gotten the word out to the lawyers,” he said. “Our program doesn’t cost a dime, there’s no fees at all for first class treatment. I thought they’d be knocking the door down.”

They have such a success rate, Esary said, “because people have bought in. If you are our program you can get a temporary license, so you can drive to the program, and keep a job. There’s no cost, first class treatment, and hopefully you get well.”

The treatment includes counselors and psychiatric care from McIntosh Trail. They work with Waypoint Veterans Resource Center to get help for the veterans, and work with Veterans Affairs, local prosecutors and law enforcement.

Only persons with mental health issues who have committed offenses or veterans who have become involved with the criminal justice system are eligible. No one with a current or prior sales, distribution or intent charge will be considered, nor will anyone with a residential burglary, sex crime or violent offense. Other disqualifiers may include number of prior arrests and convictions, but requirements are evaluated on a case-by-case basis.